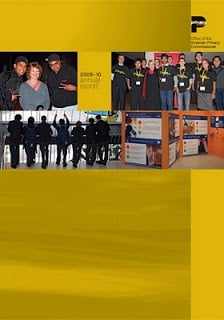 Late last week Privacy Victoria officially launched their annual report for 2009-2010 which provides some interesting highlights into how privacy as an issue has been engaged during the past year. It is focuses on their work around Victoria and engagement with various stakeholders who have required the assistance of Privacy Victoria such as local and state government agencies as well as complaints.

You will also find the Privacy Victoria's Youth Advisory Group featured in the report, a group whom I've been quite fortunate to work with. Together, we have been actively seeking to raise privacy awareness among young people and helped run the Privacy Victoria 'Watch this space' conference held in May, and you can find photos and information of our contributions on the cover and page 33.

I have also highlighted parts of the report which I found interesting, although you may wish to read about them within the context of the report as well: