My tour of Wilsons Prom

It's been months since I've visited Wilsons Prom, last time I was there, I came via ship (Young Endeavour) so it was quite an experience to return now in more leisurely terms with the island where I also shared my birthday with. 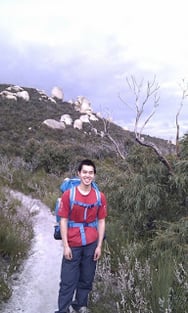 Wilsons Prom itself is a place of refuge, in fact, one of our camping site was situated in a cove called, 'Refuge Cove'. A place where the ship I had traveled earlier would have anchored, had the weather been more reasonable back then. Even so, there was little mobile coverage around the regions that we walked. Everywhere we went we would see nature in it's essence, left mainly alone from the influences of man. There were of course the camping sites, trails that ran through the forests, and hallmarks left behind from fires lit on the island months and years before. Nonetheless, it was a welcome break from the modern world full of technology, cars and the like.

We did see the odd ship and boat here and there, but essentially, trees and wildlife were our friends. As were the food and gear in our backpacks and our fellow hikers within my group, along with other traveling hikers - some lonesome, in pairs or in small groups. It is quite an experience to live off one's pack, and it reminds me of when I am traveling and living out of my suitcase. Only rather than stocking my backpack from supplies at local stores or supermarkets, I would venture towards the rivers and creeks to replenish my water supplies or perhaps trade with fellow hikers.

The terrain itself for which the trails ran across varied, some quite easy and well developed, while others remained quite less explored and treaded. The lurching plants and overgrowth finding themselves reaching over our paths. Still, these paths were managed from time to time, most likely in preparation of the peak session. Where hikers would come in small packs to explore this generally untouched land.

I went myself with a group of kids, each seeking to earn their Duke of Edinburgh Bronze, Silver or Gold awards. I being the older and more experienced on was expected to take the lead, and throughout the journey I discovered what true leading was and the need to ensure that with or without me these kids would be able to live out here on those own. I'm glad that everyone managed to come out in one piece - even through the sometimes harsh and steep trails that had been set for trekkers just like us...